JVF Solutions is your premier source for all things online. From responsive websites to digital marketing services to online marketing strategy, we've got you covered.


Like many other social platforms, Instagram has created its share of influencers and internet celebrities. It’s the cool cousin to Facebook. Everyone’s grandma is now using Facebook but the cool kids are posting their photos on Instagram. Of course, all was well in the Meta family until TikTok started giving them some serious competition. Instagram responded by repositioning IGTV as Instagram Video. And now that their algorithm is pushing more video content and content that its AI believes you’ll like, people are upset. Are they upset enough to abandon the platform? That remains to be seen. But to figure out Instagram’s future, we need to look at its past (and what led up to it).

Depending on the source, Instagram has between 1.2 and 1.5 billion monthly users in 2022. In other words, more than 25% of the world’s population is allegedly using it. Of course, some of those users are bots, business accounts, accounts for people’s pets, etc… And there are folks that have multiple accounts. But even if those fake/additional accounts make up half of that number (which is unlikely), it’s still a huge install base.

People use Instagram for communicating with friends & family, to promote their brand/business, or as a source of income. The majority of Instagram users fall into that first category. The second category is what pays the bills for the platform. And the third category is the one that many folks in the other two strive to be like. People in the third category are the ones that are most likely to abandon Instagram, so we’ll focus on them.

Before social media, everyone that wanted to be famous would move to the Los Angeles area and start waiting tables. After all, if the right agent, actor, director, etc… came in while you’re on duty, you could get discovered. Reality TV changed that. From Star Search to The Bachelor to  American Idol to Love is Blind, you could audition and get on TV without paying the dues of becoming an actor or actress. Then YouTube changed everything.

YouTube allowed anyone with the ability to record video and an internet connection to show their stuff to the world. People went to the platform in droves and Google paid $1 billion for the platform. And the term “YouTube Famous” was coined. But not everyone can sing, dance, tell jokes, or teach fun things. In other words, YouTube was a video platform and not everyone was suited for video (or imaginative enough to use it for their talents).

Fast forward to today, where people have adapted to use video to promote their brands. A model can show a 10-second video that starts at her head and then pans down giving a close-up view of everything from her earrings to her shoes. An artist can create a slide show of his photos, paintings, or digital art. Weight-loss coaches can create videos where a before picture morphs into an after photo. And the musicians, dancers, motivational speakers, and other folks that have followings on YouTube, can now repurpose their existing content and share it with a new audience.

It’s Hard to Get a Following

With literally over a billion other people vying for everyone’s attention, it’s not easy to rise to fame. In the early days, when there was less competition, it was easier. Once Facebook/Meta took over Instagram, there was some promise with cross-promotion between the two platforms. So if you had a large following on Facebook, you could invite those connections to follow you on Instagram.

But these platforms need to make money so we can use them for free. So sponsored posts and ads were a way to pay to get more followers and exposure. The ones that did it organically either were in the right place at the right time or invested a substantial amount of time and effort into the platform. To make things even more challenging, Instagram’s algorithm worked in a way where it penalized content that didn’t get engagement.

So let’s say you’re a musician that gets 10,000 interactions on average for your videos. Then you decide that it would be cool to post a video of you playing Dungeons & Dragons with your friends. Despite the popularity of Stranger Things, your D&D video only gets 1000 interactions. So now, Instagram believes your account isn’t as popular, so it shows your next music video less often than it would have had you not shared the D&D video. So as you can see, it’s not easy to get (or maintain) a  large following on Instagram.

The Power of Influencers

Influencers are the ones most likely to leave Instagram due to algorithm changes, or so they say. Right now, about 15% of what you see on Instagram is “recommended content.” These are sponsored posts, ads, and other accounts that Instagram’s AI thinks you’ll find interesting. Meta CEO Mark Zuckerberg said on a July, 2022 Meta earnings call that he plans to double the amount of “recommended content” on both Facebook and Instagram. That got a lot of influencers riled up because they believed that it would impact their content.

While influencers don’t control the platform, they do have influence (pun intended) over their own audience. So just like they can get their followers to use their line of hair care, they can influence how they feel about the platform. They can also threaten to leave, which is an interesting gambit. Given how hard it is to get a following, it’s unlikely that someone is going to walk away from it. But the optics of threatening to leave is another story.

When a high-profile influencer threatens to quit a platform, regardless of whether the threat is empty, it makes the news. Contrary to the phrase “there’s no such thing as bad publicity,” a news story like this is tough to spin. Our take is that this talk is all noise and very few of these influencers would actually leave the platform. They have nothing to gain by leaving and nothing to lose by staying.

If you find the platform useful, there’s no reason to leave because some hot-headed celebrity tells you to. If you’re concerned about the data mining, security, and privacy issues, then that’s another conversation. But this drama around the algorithm does illustrate a point that a lot of Instagram users, and especially influencers, don’t realize. You don’t own the platform. Yes, you created the images, videos, and words that make up your post. But if you read the terms and conditions, the platform owns the rights to the content you post. So they can technically do whatever they want on it.

We’ve seen influencers that have had their online presence wiped out because they were banned from a platform. Fake accounts that resemble a celebrity (or someone not so famous) pop up all of the time. We’re currently helping someone who lost access to her account due to a phishing attack. But while you can protect yourself from those situations, you can’t control what the platform does.

And this drama has shown us that they can, and will, do whatever they believe will bring in more money. People are always speculating that these platforms will start charging money to use. That’s unlikely, but they may do things like limit the number of posts you can make per day or how many accounts you can connect with unless you pay a premium. 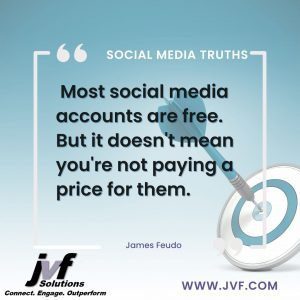 First, don’t put all of your eggs in one basket. Most social media accounts are free, but it doesn’t mean you’re not paying a price for them. So diversify with an omnichannel marketing strategy. Even if you’re only active on one platform, post to another so you have a backup. A lot of folks on TikTok create multiple accounts and post the same content to all of them. TikTok doesn’t penalize you for content performance.

Second, we highly recommend having a WordPress website as your ultimate content repository. This way, you own your content and you aren’t tied down to any hosting provider. Wix, Squarespace, and other all-in-one site builders put you at the same risk as social media. If they raise prices, you can either suck it up or you need to rebuild elsewhere.

Social Media has been around for more than a decade and each day, thousands of people are using it for the first time....

How to Deal with Social Media Overload

Social media can be an incredible tool for promoting your business. Where else can you promote your brand nonstop for...

Blogging is the most effective way to keep your website from getting stale. We include the ability to blog in all of...